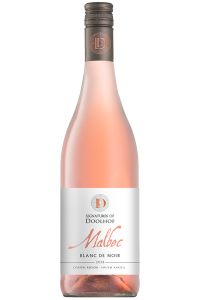 A delicate version of Malbec in a lively and fresh style.

Made from hand selected grapes from our estate in the Limietberg as well as grapes sourced in small batches in Simonsberg-Paarl ward. Light Salmon pink in colour with delicate aromas of crushed strawberries, flower petals and underlying white truffles. Finishes with a subtle freshness of pomegranates and a stylish zesty silkiness.

Picked by hand from our bushvine block as well as from a trellised block of grapes in Paarl at different ripeness levels between 16 and 23 February. Whole bunch pressings at incremental pressure levels to slowly extract colour and clean juice which was fermented seperately at 13 - 16°C to obtain lovely vibrant aromas. Extended lees contact for three months after which wine was settled clear and stabilized. Bottled end of May 2018 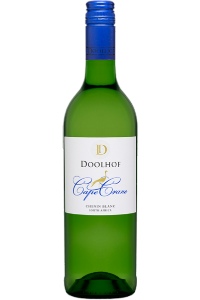 Our second 100% Chenin blanc with a refreshing bouquet of succulent fruit and delicate florals.

Light straw in colour, with a green tint, the nose is complex and fresh with Cape gooseberry, floral, citrus and a touch of ripe melon. The palate crisp and refreshing, well balanced with a lingering zesty finish.

Handpicked in the early morning, with grapes received at the cellar, still cool, and in great condition. Whole bunch sorting done, with the crushing of berries thereafter. Free run juice was recovered, with a light pressing of skins, and 24 hour settling thereafter. The clear juice was racked and fermentation was induced with commercial yeast. Fermentation lasted 21 days, with fermenting temperatures at around 13 ̊ Celsius. 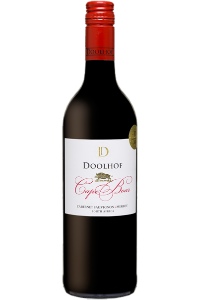 Red plum in colour, with blackberry, cherry, truffle and cedar wood on the nose. The palate, medium in body, shows an abundance of fruit, softness and fine subtle tannins towards the back. The wine has a dry and lingering finish.

A Bordeaux style blend of Cabernet Sauvignon and Merlot. Both cultivars were handpicked, sorted and then vinified seperately. Three pump-overs were done daily, extracting colour and flavours. 'The wine was blended and aged for 16 months and bottled in September 2014. 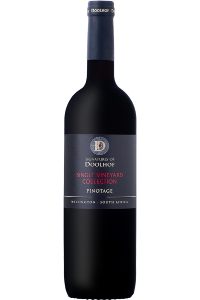 A modern, South African Pinotage bursting with an abundance of vibrant fruit.

Deep crimson in colour with aromas of clove vanilla, black berries and sweet spice on the nose. The palate is full and vibrant with juicy yet elegantly soft tannins which lingers to a smooth and long finish. Enjoy now or store properly till 2024.

Harvesting performed by hand. Pre-cooling of grapes to around 6 degrees before crushing. Cold soaking performed for two days, with the start of fermentation, followed by the addition of commercial yeast thereafter. Pump overs done three times per day, with a rack and return (Delestage) and pressed at 5° Balling. 14 days extended skin contact after fermentation to obtain richness. Aged in 300L French oak barrels for 12 months. 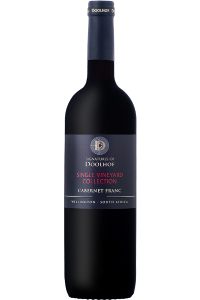 Serve with beef fillet with a creamy wild mushroom sauce. 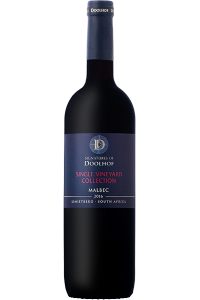 Intense garnet to dark purple in colour with vibrant aromas of violets, cocoa and black pepper. The palate shows richness and roundness with flavours of blackberries and plum.

Malbec ripens quite early yielding superior quality fruit with good analysis. The grapes were hand picked and whole bunch sorted over a week, extracting colour and aromas early. A slow fermentation to start, as well as extended time on the skins, further enhanced wine quality. The grapes were pressed at -2° Balling and matured in 40% new French oak barrels for 12 months. 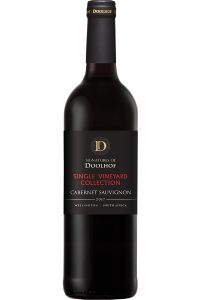 A classic Cabernet for great enjoyment.
Garnet, brick red in colour, with blackberry, pencil shavings, black cherry and some spice on the nose. Medium in body with fine, smooth tannins. The wine is soft and juicy with great length.
From our premium vineyard. East-West row direction, with well drained sandy soil. Grapes were picked by hand and whole bunch sorting done at the cellar. This added to the quality of the final product. Cold soaking was done for two days, extracting colour and aromas early on in the process. A slow fermentation, as well as extended time on the skins further enhanced wine quality. After malolactic fermentation, the wine was racked to 300l barrels of which 40% new French oak predominantly. The wine matured for 12 months after which it was filtered and bottled in May 2018.
ANALYSIS
Varietal: Cabernet Sauvignon
Alcohol: 14.5%
pH: 3.45
Total Acidity: 6.4 g/l
Residual Sugar: 3.9 g/l.
SERVING SUGGESTION
Serve with lamb stew, beef fillet with a wild mushroom sauce. Pairs extremely well with venison, vegetarian cuisine, pizza and pasta.
CHEF'S SPECIAL
Venison Burger topped with roast veggies 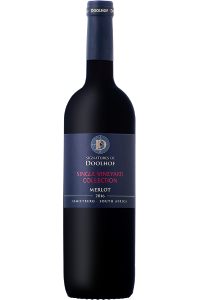 A classic Merlot with a velvety balance of red and black fruit and well integrated oak.
This Merlot has a beautiful deep crimson hue. Unmistakable aromas of blackberries, cassis and ripe plums seduce the nose while also showing gentle whiffs of cedar. Full bodied and complex, this wine has a juicy mouth-feel, with mineral tones evident in the background. The palate is layered with plush fruit, dark chocolate and supported by firm tannins that lead to a luscious and persistent finish.
From our premium vineyard. Hand picked, with bunch sorting done at the cellar. After 24 hours of cold soaking, to enhance the colour, fermentation was started. Fermentation temperatures ranged between 22-26°C. Three pump-overs were done daily. The wine finished fermentation on the skins. Extended skin contact up to 14 days, produced a full wine with firm tannins yet elegant with lots of juicy fruit. The wine was aged for 14 months in 30% new and 70% second fill 225L French oak barrels. Wine was stabilized and bottled in Decembeer 2013. Enjoy now or keep up to 2020. 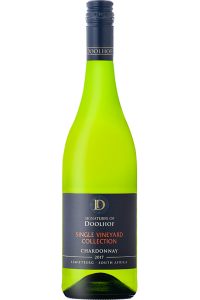 A refreshing crowd pleaser. Perfect for alfresco dining.
Pale straw, with green tint in the glass. The nose is fresh and lively with lemon, grapefruit and floral aromas to the fore, ending in a bouquet of papaya and melon. The wine is crisp, with a great fruit & acid balance, persistent and dry to the finish.
Chardonnay chosen from the coolest block on the farm. Harvesting was done during the early morning, with the aim to protect the flavour and aromas from the vineyard. The grapes were whole bunch pressed, and the juice fermented in two seperate tanks, with different yeast, each adding to the complexity of the final wine. The wine spent three months on the lees, with lees stiring performed once a week. The wine was stabilized, filtered and bottled in May 2017.
ANALYSIS
Varietal: Chardonnay
Alcohol: 12.44%
pH: 3.46
Total Acidity: 6.8 g/l
Residual Sugar: 3.8 g/l
SERVING SUGGESTION
Serve with shellfish, mussels in a white wine fennel sauce, duck and also great with vegetarian cuisine, cheese and nuts.
CHEF'S SPECIAL
Apple strudel dessert. 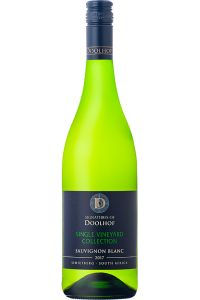 Pale yellow to clear with a light green tinge in colour. The wine is dominated by lovely tropical notes with underlying green figs and goosberries on the nose. It is underlined with a core of mineral flavours. A crisp line of acidity carries the wine beautifully, with a fresh and lingering finish.

The grapes were harvested at night and processed reductively to preserve flavours and aromas. After settling out all rough lees, the juice was racked and inoculated with a commercially selected yeast strain and fermented between 13 and 15 degrees Celsius for about a month before some lees contact followed by clarifying and bottling in May 2017.

SERVING SUGGESTION
Serve with shellfish, mussels in a creamy white wine sauce, delicate fish, oysters as an aperitif, and also a great companion at any picnic. 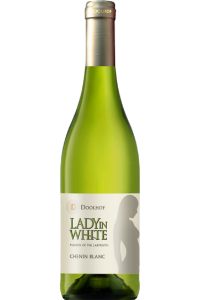 A complex, crisp andlively blend of Chenin Blanc and a touch of Semillon

The two varietals in the blend were fermented seperately in stainless steel, after which the Chenin blanc was aged in a french oak Foudre for 12 months. Chenin blanc makes up 85% and the Semillon 15%. The wine was stabilzed and bottled in May 2018. 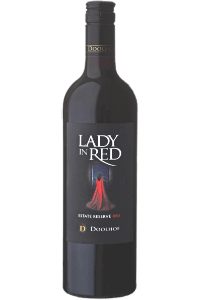 A warm, rich Bordeaux-style wine. This lady is seductive, sophisticated and elegant.
Garnet red wine with an intense perfumed mélange of red and black fruits with cedar and oak undertones. On the palate, the fruit / oak balance is harmonious with soft, firm tannins, cassis and plum flavours producing a wine of excellent structure. The fruit lingers long on the palate.
Bordeaux-style blend. Harvesting done by hand, followed by grape sorting. Cold soaking for 48 hours. Each varietal was fermented separately with great attention to quality, to ensure optimal development in profile and character for each wine. Extended skin contact followed fermentation allowing for better extraction from skins. Each wine was matured separately for 14 months in 225l French oak barrels. After blending and filtration, bottling took place in December 2009. 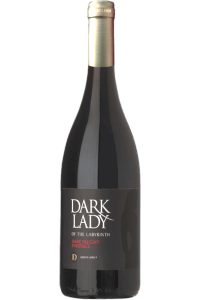 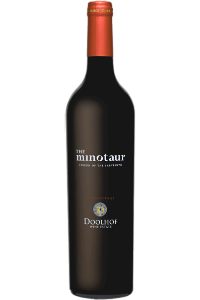 A Cape blend of Pinotage, Malbec, Shiraz, Merlot, Cabernet Sauvignon and Petit Verdot. Dark purple in colour with dark cherry, blackberry and truffle. The palate is medium to full bodied with a generous persistent finish.
The Minotaur – a creature half man, half bull was the product of forbidden love between Pasiphae and Poseidon. Banished to the Labyrinth by King Minos for terrorising the Cretans, he was eventually killed by Theseus, the Athenian Hero.
The wine was produced from hand picked grapes from our premier vineyards. Four pump overs were done per day, adding to colour, richness and tannins. The different grape varietals were fermented separately with extended maceration on skins after fermentation. Only the best barrels were selected for this wine. The wine was aged for 14 months in 60% new and 40% second fill 225L French oak barrels. Wine was stabilized and bottled in November 2009. 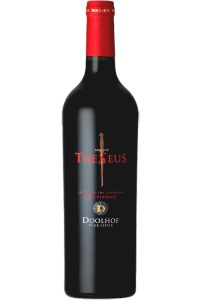 A classic Bordeaux blend of Cabernet Sauvignon, Merlot, and Cabernet Franc. Purple in colour, showing some maturation. The nose is forthcoming with blackberry, black cherry and cassis. The palate is full and juicy with soft, fine, well integrated tannins. The wine shows great depth with a long, lingering finish.

Theseus, the mythical King of Athens who travelled widely in search of adventure was most famously known for the slaying of the Minotaur in the labyrinth of Crete. He was assisted by Ariadne, Dark Lady of the Labyrinth, who later married Dionysus, god of wine (Bacchus – Roman). This wine, a rich and subtle blend of five varietals, has been produced to give an intense and unforgettable experience – a true “Legend of the Labyrinth”.

The wine was produced from handpicked grapes from our premier vineyards. Four pump overs were done per day, adding to colour, richness and tannins. The different grape varietals were fermented separately with extended maceration on skins after fermentation. Only the best barrels were selected for this wine. The wine was aged for 24 months in 80% new and 20% second fill 225L French oak barrels. Wine was stabilized and bottled in June 2014. Drink now or age up to 2025.

SERVING SUGGESTION
A rich, full bodied blend which deserves the best cuts of meat, including Fillet Steak and Saddle of Lamb

CHEF'S SPECIAL
Saddle of Lamb with fresh Rosemary, roast potatoes and a selection of summer vegetables.

To Stock These Wines ↑

Call us on 021 703 3775 or Email Us and we will arrange for your area Wine Merchant to contact you for a tasting of these wines before you stock them.